SEO for the Social Media Minded: Webinar by Rand Fishkin and Nathan Latka 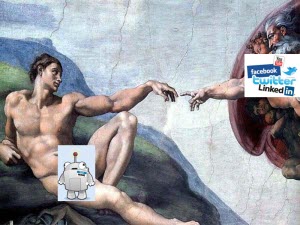 Once upon a time there were SEOs and Social Media Managers. SEOs lived on a solid planet called Data and lived by a code called Measurable Results. Social Media Managers lived in a cloud world called Engagement. Though the two could see each other from afar, they had very little contact.

Then came the dark and terrible days of the Invasion of the Cute Critters (pandas and penguins). For a while, the land of SEO seemed damaged beyond repair. And then Social Media reached down out of the heavens….(cue angelic chorus).

In reality, we live in a world where social and SEO can no longer afford to ignore each other. Last year Google launched its own social network (Google+) and quickly began to incorporate it into its core search product. At the recent Internet Summit in Raleigh NC, Bing’s head of webmaster tools emphasized as strongly as he could that social signals are now essential to the SEO health of web sites. (See “What the Search Engines Want to See“)

The problem is that few SEOs seem to “get” social, and even fewer social media types understand the first thing about SEO. The former will be another post some day, but in a recent webinar, SEOMoz’s Rand Fishkin and Nathan Latka of Lujure (now Heyo) offered their tips on basics of Facebook search optimization and inbound marketing to help social media managers do their part to get their sites found and visited.

Update: SEOmoz has now posted the recorded version of the webinar: http://www.seomoz.org/webinars/seo-for-the-social-media-mind

3 SEO Hotspots to drive traffic to your Facebook fan page

It is critically important to secure a vanity (or “custom”) URL for your Facebook page. Go to Facebook.com/username to set up your vanity URL. You can only change it once after you first set it up. There is no longer a minimum number of likes to get a vanity URL. <Tweet this tip!>

Edit it and pack with your important keywords. About section is most critical but you can also do this in other places like Description. But be natural. Don’t put so many keywords that you turn off potential fans looking at your page. <Tweet this tip!>

The first 18 characters of a status update are used as the title tag for search (public posts only). Also you can edit the title of a shared post (little-known)! In the post box for the share, click on the title to edit it. Use the keyword you want to be found for. <Tweet this tip!> 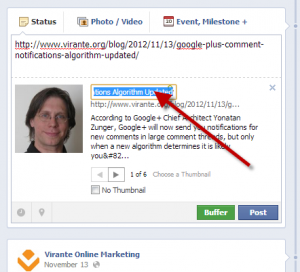 Use quotes around a search query in Facebook search. click “see more results” at the bottom of suggested results,  then click Public Posts on left. You’ll see posts from people who have used the phrase in public status updates. This searches all users, not just your friends. You can use this to test search keyword volume for internal Facebook search. Be sure to explore the search filters at the left. <Tweet this tip!> 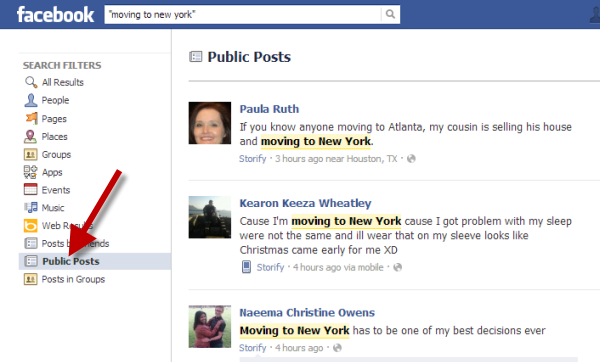 Use public post filter to see status updates by all users.

Can’t Buy Me Love: How to EARN Your Audience’s Attention without Spending a Fortune

Presented by Rand Fishkin. (Download his slides at bit.ly/cantbuylove)

Why can’t marketing be more about love? Let’s talk about earning your customer’s love

Can it be bought? Problems with that approach:

SEOMoz tools went in the crapper for around three weeks this past September. Yet customers remained surprisingly loyal. They found that customers acquired via inbound were the most loyal.

So a Third Truth about True Love: 3. You Gotta Earn It

1. Empathy + creativity = great content. When a Newsweek article about SEOMoz brought lots of SEO newbies, they noticed and created a PDF basic guide to SEO. <Tweet this tip!>
2. Innovation doesn’t always trump improvement. Find content out there that does well and make it even better. <Tweet this tip!>
3. Branding may be more valuable than links and traffic. SEOMoz Whiteboard Videos get less traffic than blog posts, but huge engagement and brand recognition for SEOMoz. <Tweet this tip!>
4. Even amateur graphics perform shockingly well. Images get more engagement.
5. Being transparent with success works, but failure works even better. Sharing mistakes gets big traffic and engagement.
Search <Tweet this tip!>
6. Ranking #1 isn’t all it’s cracked up to be. Click distribution has changed. Lots of things draw people to a result other than just position. Site domain trust, rich snippets, etc.
7. Make others look good; they will make you rank well. <Tweet this tip!>
8. Cannibalizing your own stuff sucks. Beware killing a better post with a “good” post that ranks for same keywords but doesn’t get as much engagement.
9. Sometimes it’s better to do SEO on other people’s pages. Sites such as Eventbrite, Slideshare, Google+ rank well, so put content there. A popular Google+ profile can be very powerful in search. <Tweet this tip!>
10. Co-citation may be the next “anchor text.” Search engines are watching for words that often get connected with your brand. Rand sees increasing evidence that it is possible to rank for a keyword with no anchor text links if enough authoritative sites have mentioned your brand in association with the term. <Tweet this tip!>
11. Google has a spooky nose for quality. They have many ways to sniff out how good your pages really are. They can figure out how happy people are with your pages.

12. What, when, and how frequently we share matters.
13. Sharing format and phrasing is huge. Link in the middle of a tweet gets more clicks.
14. A picture is worth 50% more engagement. On FB and G+ share a photo and put the link in the status.
15. Only sharing your own content is a recipe for disaster. Law of reciprocity.

16. Real world is more powerful than the virtual world. Worth going to events and conferences. After visiting the Guinness factory and taking a tour, Rand realized for weeks afterward he was ordering more Guinness. He attributes that to the personal connection.
17. Your community is bigger than your site and social media accounts. Find where your brand is being discussed and engage there. For example, question and answer sites such as Quora.
18. The first interaction is often the last, unless…you respond.

19. Deliverability is holding you back. returnpath.com has a lot of great resources to help improve email effectiveness. 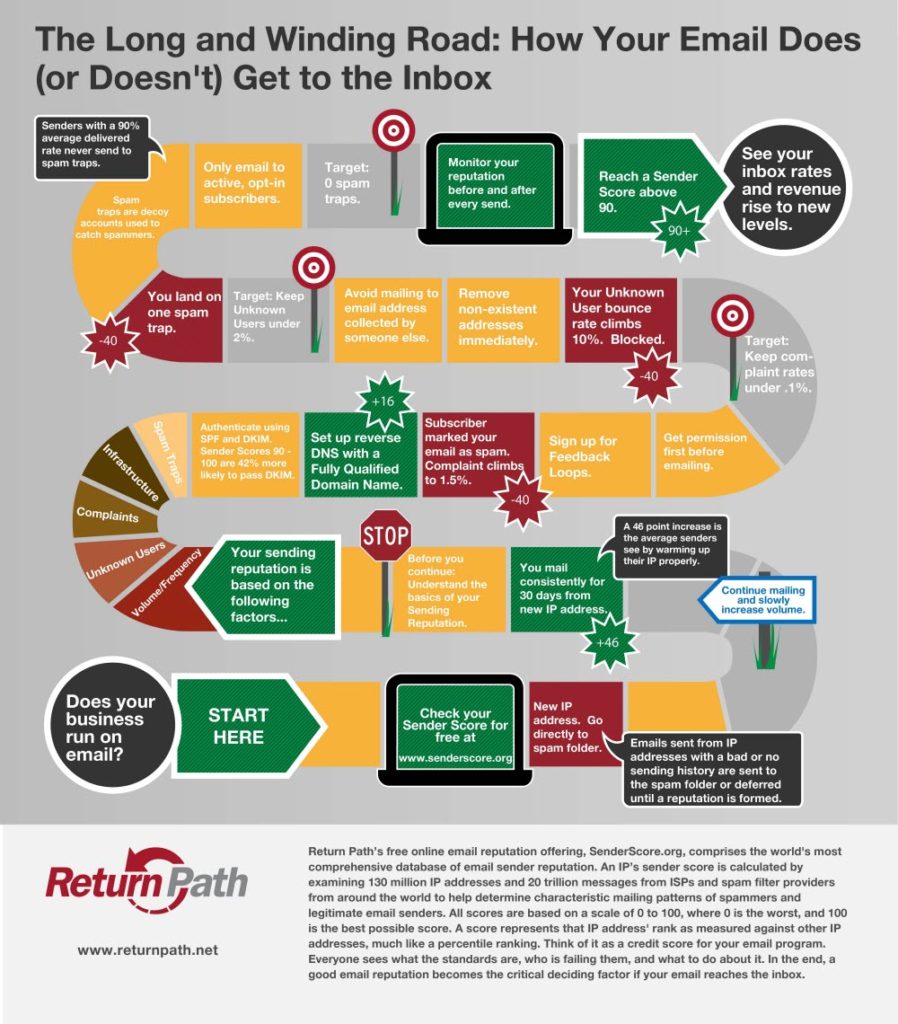 20. Newsletters with your own stuff? Meh. Newsletters with other people’s stuff? Wow. Example: The Moz Top Ten. SEOMoz used to send out a typical newsletter highlighting their own content. When they switched to featuring the ten best posts they found across the web, subscriptions and traffic goodwill skyrocketed.

21. Include only the good stuff, not the kitchen sink, in offers. “The Presenters Paradox” – adding too many things to an offering kills it by cheapening it.
22. Changing a button color isn’t game-changing CRO. Discovering customer objections is. A long page might work better if it answers objections.

Last thing about true love: 4. You can do it!

Never give up. This stuff takes time. Most people give up. But those who perceiver will earn far more than ephemeral “traffic,” they will win lifelong fans and devoted customers.

They're highly responsive and always follow up on projects. Hive Digital is professional and highly skilled, doing work that exceeds stakeholders' expectations. Sales have strongly increased from the previous year.
https://www.hivedigital.com/testimonials/highly-responsive/
0
0
Hive Digital