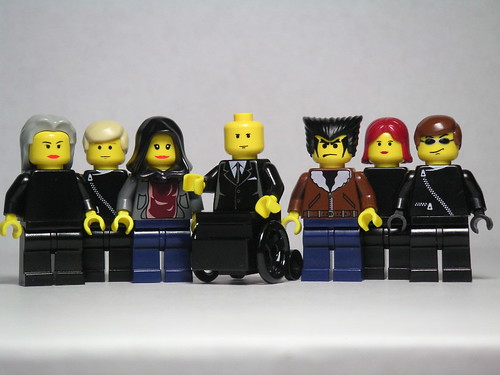 Are you one of us?

Once, we were few. And we were lonely. We had Google+ powers far beyond those of “normal” users. Some called us mutants. Eventually, our shared condition drove us together, and we became the X-Persons of Google+, sworn to use our powers for good and for awesome.

What the heck am I talking about?

Many of you who have followed me for some time know about my strange ability to be able to 99% of the time outrank almost anyone in logged-out Google search for a search of the first line of their original post. I do it again and again. I’m not going to go into all the details here; if you’re interested, read my post “Google Plus Post Rank Hijacking“

Today +Yifat Cohen and I had a chat after she noticed that she also was able to outrank some heavy hitters in Google search when resharing their posts. We went back and forth on various theories of what causes this, why some G+ profiles are more powerful than others across the board, and the only conclusion we both come to is that it isn’t anything you think, at least no one obvious thing stands out consistently. Number of followers? Amount of engagement? Posting a lot about the topic? Who’s in your circles? Engagement on the reshare? None of those emerges alone as a consistent factor in our outranking posts.

So we want to step our testing of that up to the next level.

We’re looking for a few other people who know they have this power also. Once we’ve identified the X-Persons of Google+, we’ll set up some controlled tests to see who among us is the most powerful X-Person, and we hope some patterns will emerge that will begin to give us a clue as to what makes a Google+ profile do well in Google search.

Here’s how to qualify:

1. Over the next week, find some posts in What’s Hot that meet the following criteria:

a) Are by real persons (not brand pages)
b) Are by persons with relatively large followings on G+
c) Have a lot of engagement (+1’s, comments, re-shares) on the post at the time
d) Have a fairly unique phrase as the first line of the person’s post, something that would not have a lot of exact match hits on Google.

2. Wait at least a few hours after the post first hits What’s Hot and then reshare it publicly. Do whatever you want to promote your resahre and encourage engagement with it. Or not.

3. Over the next 24 hours, periodically check an “incognito” search for the unique phrase that was the first line of the original post. Check to see if your Google+ reshare is ranking anywhere on the first page. (Incognito search means searching in the private or incognito mode of a browser where you have first cleared all history, cookies, and cache files, and are not logged in to Google.)

4. If at the end of 24 hours, for any tests you do, send a Google+ message to +Mark Traphagen or +Yifat Coen with the exact search text so we can check it for ourselves. If you are in the top rankings for at least one of your tests, we will make you an X-Person. Please also tag your Google+ posts about this with #googleplusmutants so we can find and track them.

What will the X-Persons do?

On 25 January 2012 Yifat and I will put together our list of all qualifying Google+ X-Persons. We will create a private G+ Community for all of us to plan and share further testing. Our main plan will be to compare notes of patterns observed from our own testing to date, and then to set up some pre-planned “head-to-head” testing where we set X-Persons against each other to try to see who has the most awesomest power, and why.

We will then perhaps publish some joint posts sharing our findings (if any).

If you are participating, tag your test posts with #googleplusmutants so we can follow them and watch your results “live.”

Let the call go forth! Who are the X-Persons of Google+?

Last night I ran another test of my Google+ X-Person mutant powers. I chose this post from the Google+ “What’s Hot” page, by Randal L. Schwartz. The post carries just one line of text: “Why programmers work at night,” which also happens to be the title of the article he shares in the post.

Randal posted at 8:49 a.m. EST yesterday. I reshared his post at around 8 p.m. EST. Before I went to bed late last night, his original was the only Google+ post ranking on the first page incognito for “why programmers work at night” (down the page a ways, because this phrase has competition from other web pages, including the page Randal shared.

But this morning when I checked, while Randal’s post was still on the first page (at #9), mine showed up just above his:

Some things to bear in mind:

Update to the update: As of 2 p.m. EST, my reshare post remains at #8, while Randal’s reshare has fallen to #2 on the second page.

And that my friends, is what an X-Person reshare looks like. Now, we’ll need to check this again days from now to see if it lasts.

I learned more from them in an hour than from every book I devoured and every seminar I attended on the subject this year. Anyone who knows their team, knows them as internet marketing geniuses.
https://www.hivedigital.com/testimonials/internet-marketing-geniuses/
0
0
Hive Digital