The Penguin algorithm has been part of the lives of online marketers since early 2012 when the first iteration was unleashed and decimated an industry rife with easily repeatable spam. When Google updated Penguin for the first time, it hit many webmasters who utilized unnatural inbound linking as their primary strategy for ranking well in organic search. That is, using commercial anchor text in links obtained from a multitude of websites, such as directories, blogs, comment sections, forum profiles, etc., to help a website rank for specific key terms and phrases.

How Many Times has Google Updated Penguin?

Google updated Penguin at least seven times that have been documented or confirmed, not including the two phases of the most recent Google algorithm change. The first time Google updated Penguin was in April of 2012, when Internet marketers learned the power of Penguin penalties. Manual penalties were given to websites who had violated Google’s Webmaster Guidelines, which was outlined more in-depth through their Link Schemes post. Many marketers utilize many of these strategies to this day. It is generally suggested that you avoid any of the following tactics in the post-Penguin SEO world:

Other Times Google has Updated the Penguin Algorithm…

Google updated and tweaked the first iteration of their algorithm in May 2012 (Penguin 1.1) and October 2012 (Penguin 1.2). It was not until 2013 when Google updated Penguin in a massive way in the form of Penguin 2.0 on May 22nd, 2013. This update was said to have been more finely targeted to the page level as opposed to past iterations of the algorithm changes. Only one tweak was made to Penguin that year, which landed on October 4th, 2013 with Penguin 2.1. This was said to be a data update (or refresh) rather than an update to the algorithm itself.

Over a year passed before we heard from Google again regarding the Penguin algorithm, with the release of Penguin 3.0 on October 17th, 2014. Again, this update seemed to be a data-only update, rather than sweeping changes to the code of the algorithm itself. There was chatter in the SEO news realm that Google was moving towards developing a version of Penguin that would run automatically, as opposed to the data refreshes that had occurred over the past two years. This report was confirmed by a Google spokesperson that they would be updating the Penguin algorithm continuously. 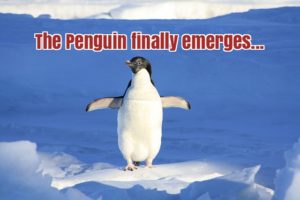 Did Google Update Penguin for the Last Time?

Penguin 4.0 was released in two separate iterations, not including its initial announcement on September 23rd, 2016 which can be read here. The two phases were released on September 27th and October 6th, the second being a reversal of all previous Penguin penalties. It was confirmed to be as the Google spokesperson had said, Penguin was a continuously-rolling algorithm that did not require manual refreshes of its index. The days of algorithmic penalties were in the past, as Penguin would automatically devalue links that triggered its filters, and many webmasters and marketers saw previously penalized websites emerging from the depths of the algorithmic dungeon.

Wow. Here’s another. Severely suppressed after manual action and then Penguin. pic.twitter.com/9LgYYoNkNj

Coverage of the effects of the Penguin 4.0 algorithm update have been widely covered by the SEO news outlets. Across the board this update has had mostly positive effects for websites who were previously penalized by the algorithm. There are still some who have their ‘heads underwater’ but that may be due to a lack of effort. There has also been discussion about whether or not the disavow tool they developed was still a useful for SEOs. However, it was confirmed by Google’s Gary Illyes that the disavow tool was still helpful. However, removing links is still the best option for avoiding any run-ins with any Penguins.

Do you have any success or failure stories with the latest, greatest iteration of Google’s Penguin update? If so, please let us know in the comments below, or let us know on Twitter @HiveMarketing!

Hive's efforts have increased our website traffic by about 30%.
https://www.hivedigital.com/testimonials/increased-our-website-traffic/
0
0
Hive Digital